Sarah and Andy fell in love while working to keep drug users from overdosing. But when his own addiction reemerged, Andy’s fear of returning to prison kept him from the best treatment.

She was in medical school. He was just out of prison.

Sarah Ziegenhorn and Andy Beeler’s romance grew out of a shared passion to do more about the country’s drug overdose crisis.

Ziegenhorn moved back to her home state of Iowa when she was 26. She had been working in Washington, D.C., where she also volunteered at a needle exchange — where drug users can get clean needles. She was ambitious and driven to help those in her community who were overdosing and dying, including people she had grown up with.

“Many people were just missing because they were dead,” said Ziegenhorn, now 31. “I couldn’t believe more wasn’t being done.”

She started doing addiction advocacy in Iowa City while in medical school — lobbying local officials and others to support drug users with social services.

Beeler had the same conviction, born from his personal experience.

“He had been a drug user for about half of his life — primarily a longtime opiate user,” Ziegenhorn said.

Beeler spent years in and out of the criminal justice system for a variety of drug-related crimes, such as burglary and possession. In early 2018, he was released from prison. He was on parole and looking for ways to help drug users in his hometown.

He found his way to advocacy work and, through that work, found Ziegenhorn. Soon they were dating.

“He was just this really sweet, no-nonsense person who was committed to justice and equity,” she said. “Even though he was suffering in many ways, he had a very calming presence.”

People close to Beeler describe him as a “blue-collar guy” who liked motorcycles and home carpentry, someone who was gentle and endlessly curious. Those qualities could sometimes hide his struggle with anxiety and depression. Over the next year, Beeler’s other struggle, with opioid addiction, would flicker around the edges of their life together.

Eventually, it killed him.

People on parole and under supervision of the corrections system can face barriers to receiving appropriate treatment for opioid addiction. Ziegenhorn said she believes Beeler’s death is linked to the many obstacles to medical care he experienced while on parole.

About 4.5 million people are on parole or probation in the U.S., and research shows that those under community supervision are much more likely to have a history of substance use disorder than the general population. Yet rules and practices guiding these agencies can preclude parolees and people on probation from getting evidence-based treatment for their addiction.

A Shared Passion For Reducing Harm

From their first meeting, Ziegenhorn said, she and Beeler were in sync, partners and passionate about their work in harm reduction — public health strategies designed to reduce risky behaviors that can hurt health.

After she moved to Iowa, Ziegenhorn founded a small nonprofit called the Iowa Harm Reduction Coalition. The group distributes the opioid-overdose reversal drug naloxone and other free supplies to drug users, with the goal of keeping them safe from illness and overdose. The group also works to reduce the stigma that can dehumanize and isolate drug users. Beeler served as the group’s coordinator of harm reduction services.

“In Iowa, there was a feeling that this kind of work was really radical,” Ziegenhorn said. “Andy was just so excited to find out someone was doing it.”

Meanwhile, Ziegenhorn was busy with medical school. Beeler helped her study. She recalled how they used to take her practice tests together.

“Andy had a really sophisticated knowledge of science and medicine,” she said. “Most of the time he’d been in prison and jails, he’d spent his time reading and learning.”

Beeler was trying to stay away from opioids, but Ziegenhorn said he still used heroin sometimes. Twice she was there to save his life when he overdosed. During one episode, a bystander called the police, which led to his parole officer finding out.

“That was really a period of a lot of terror for him,” Ziegenhorn said.

Beeler was constantly afraid the next slip — another overdose or a failed drug test — would send him back to prison.

An Injury, A Search For Relief

A year into their relationship, a series of events suddenly brought Beeler’s history of opioid use into painful focus.

It began with a fall on the winter ice. Beeler dislocated his shoulder — the same one he’d had surgery on as a teenager.

“At the emergency room, they put his shoulder back into place for him,” Ziegenhorn said. “The next day it came out again.”

She said doctors wouldn’t prescribe him prescription opioids for the pain because Beeler had a history of illegal drug use. His shoulder would dislocate often, sometimes more than once a day.

Beeler knew what precautions to take when using opioids: Keep naloxone on hand, test the drugs first and never use alone. Still, his use was escalating quickly.

The couple discussed the future and their hope of having a baby together, and eventually Ziegenhorn and Beeler agreed: He had to stop using heroin.

They thought his best chance was to start on a Food and Drug Administration-approved medication for opioid addiction, such as methadone or buprenorphine. Methadone is an opioid, and buprenorphine engages many of the same opioid receptors in the brain; both drugs can curb opioid cravings and stabilize patients. Studies show daily maintenance therapy with such treatment reduces the risks of overdose and improves health outcomes.

But Beeler was on parole, and his parole officer drug-tested him for opioids and buprenorphine specifically. Beeler worried that if a test came back positive, the officer might see that as a signal that Beeler had been using drugs illegally.

Ziegenhorn said Beeler felt trapped: “He could go back to prison or continue trying to obtain opioids off the street and slowly detox himself.”

He worried that a failed drug test — even if it was for a medication to treat his addiction — would land him in prison. Beeler decided against the medication.

A few days later, Ziegenhorn woke up early for school. Beeler had worked late and fallen asleep in the living room. Ziegenhorn gave him a kiss and headed out the door. Later that day, she texted him. No reply.

She started to worry and asked a friend to check on him. Not long afterward, Beeler was found dead, slumped in his chair at his desk. He’d overdosed.

“He was my partner in thought, and in life and in love,” Ziegenhorn said.

It’s hard for her not to rewind what happened that day and wonder how it could have been different. But mostly she’s angry that he didn’t have better choices.

“Andy died because he was too afraid to get treatment,” she said. 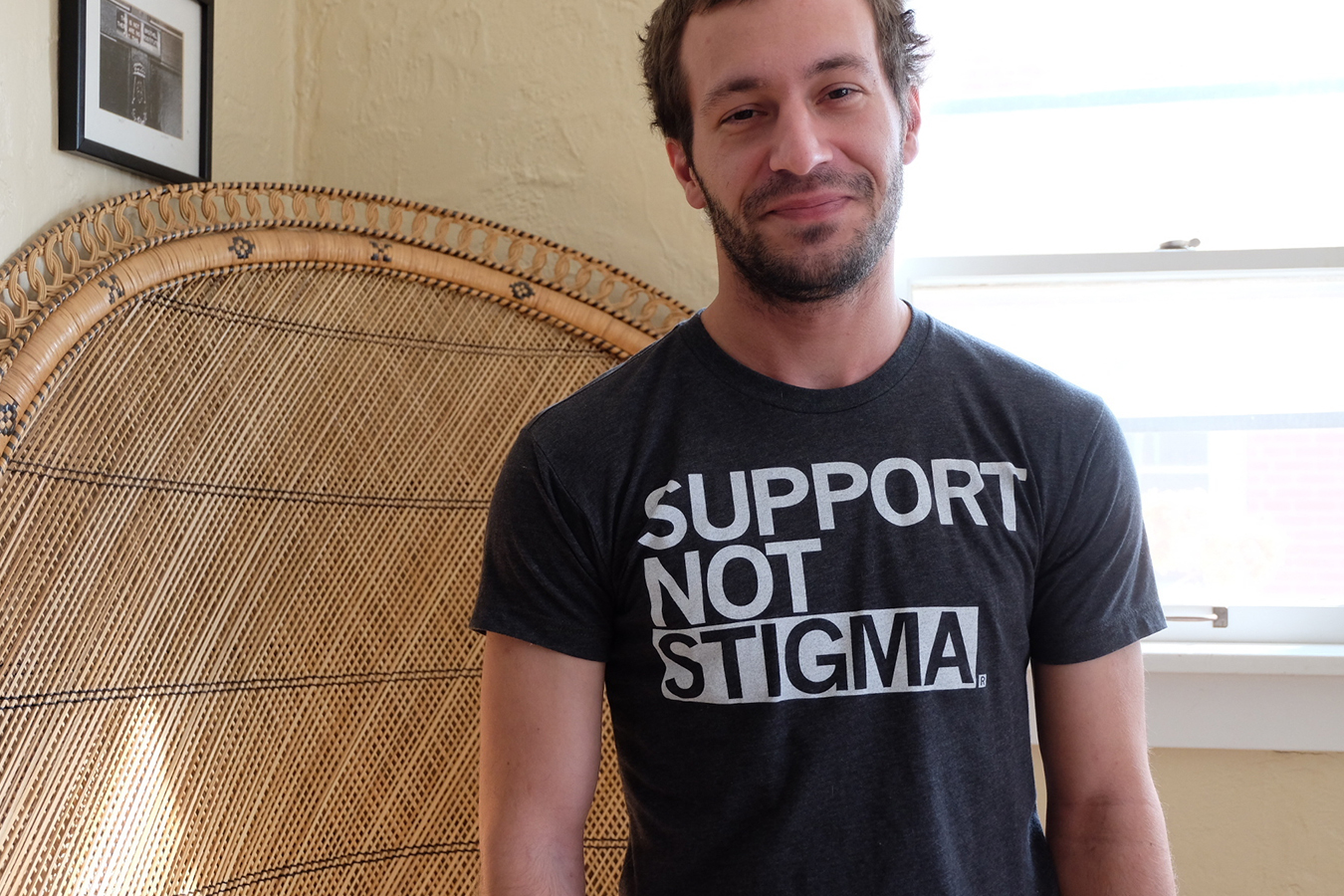 Beeler was services coordinator for the Iowa Harm Reduction Coalition, a group that works to help keep drug users safe. A tribute in Iowa City after his death began, “He died of an overdose, but he’ll be remembered for helping others avoid a similar fate.”(Courtesy of Sarah Ziegenhorn)

How Does Parole Handle Relapse? It Depends

It’s not clear that Beeler would have gone back to prison for admitting he’d relapsed and was taking treatment. His parole officer did not agree to an interview.

But Ken Kolthoff, who oversees the parole program that supervised Beeler in Iowa’s First Judicial District Department of Correctional Services, said generally he and his colleagues would not punish someone who sought out treatment because of a relapse.

“We would see that that would be an example of somebody actually taking an active role in their treatment and getting the help they needed,” said Kolthoff.

The department doesn’t have rules prohibiting any form of medication for opioid addiction, he said, as long as it’s prescribed by a doctor.

But Dr. Andrea Weber, an addiction psychiatrist with the University of Iowa, said Beeler’s reluctance to start treatment is not unusual.

“I think a majority of my patients would tell me they wouldn’t necessarily trust going to their [parole officer],” said Weber, assistant director of addiction medicine at the University of Iowa’s Carver College of Medicine. “The punishment is so high. The consequences can be so great.”

Weber finds probation and parole officers have “inconsistent” attitudes toward her patients who are on medication-assisted treatment.

“Treatment providers, especially in our area, are still very much ingrained in an abstinence-only, 12-step mentality, which traditionally has meant no medications,” Weber said. “That perception then invades the entire system.”

Experts say it’s difficult to draw any comprehensive picture about the availability of medication for opioid addiction in the parole and probation system. The limited amount of research suggests that medication-assisted treatment is significantly underused.

“It’s hard to quantify because there are such a large number of individuals under community supervision in different jurisdictions,” said Michael Gordon, a senior research scientist at the Friends Research Institute, based in Baltimore.

A national survey published in 2013 found that about half of drug courts did not allow methadone or other evidence-based medications used to treat opioid use disorder.

A more recent study of probation and parole agencies in Illinois reported that about a third had regulations preventing the use of medications for opioid use disorder. Researchers found the most common barrier for those on probation or parole “was lack of experience by medical personnel.”

Faye Taxman, a criminology professor at George Mason University, said decisions about how to handle a client’s treatment often boil down to the individual officer’s judgment.

“We have a long way to go,” she said. “Given that these agencies don’t typically have access to medical care for clients, they are often fumbling in terms of trying to think of the best policies and practices.”

Increasingly, there is a push to make opioid addiction treatment available within prisons and jails. In 2016, the Rhode Island Department of Corrections started allowing all three FDA-approved medications for opioid addiction. That led to a dramatic decrease in fatal opioid overdoses among those who had been recently incarcerated.

Massachusetts has taken similar steps. Such efforts have only indirectly affected parole and probation.

“When you are incarcerated in prison or jail, the institution has a constitutional responsibility to provide medical services,” Taxman said. “In community corrections, that same standard does not exist.”

Taxman said agencies may be reluctant to offer these medications because it’s one more thing to monitor. Those under supervision are often left to figure out on their own what’s allowed.

“They don’t want to raise too many issues because their freedom and liberties are attached to the response,” she said.

Richard Hahn, a researcher at New York University’s Marron Institute of Urban Management who consults on crime and drug policy, said some agencies are shifting their approach.

“There is a lot of pressure on probation and parole agencies not to violate people just on a dirty urine or for an overdose” said Hahn, who is executive director of the institute’s Crime & Justice Program.

Addiction is considered a disability under the Americans with Disabilities Act, said Sally Friedman, vice president of legal advocacy for the Legal Action Center, a nonprofit law firm based in New York City.

She said disability protections extend to the millions of people on parole or probation. But people under community supervision, Friedman said, often don’t have an attorney who can use this legal argument to advocate for them when they need treatment.

“Prohibiting people with that disability from taking medication that can keep them alive and well violates the ADA,” she said.

This story is part of a partnership between NPR and Kaiser Health News.